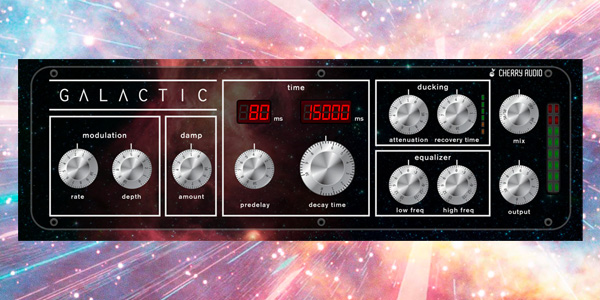 Cherry Audio is proud to announce the latest in our growing line of plugin effects processors, Galactic Reverb. Galactic is an algorithmic effects plugin that captures the expansive sound of coveted classic hardware digital reverbs. With a decay time up to 35 seconds, it enables users to create massive, beautiful aural spaces. Galactic is a natural for transporting guitars, drums, keys, and even vocals into an extraterrestrial ambience.

Galactic began as an effect option in Cherry Audio's highly acclaimed Dreamsynth. Buenasideas magazine praised this reverb setting for its ability to "sound like gliding through the vastness of space." Many users cited it as one of their favorite aspects of Dreamsynth and desired a standalone plugin of this otherworldly effect. Bursting out like a supernova, Galactic Reverb was born.

But we didn't stop there - we fine-tuned Galactic, added modulation and predelay, and equipped it with an equalizer. A remarkable ducking function has been added for automatically reducing reverb levels while a singer or an instrument is playing to improve mix clarity, no sidechain required! Ducking can also be used to dramatically alternate between super dry and immense reverb tails, setting Galactic apart from other spacey reverbs.

Galactic Reverb is intuitive to use and produces musical results at lightspeed. Like all Cherry Audio plugins, Galactic includes our convenient preset browser, loaded with over 50 ethereal presets. It can be used as an insert or bus effect, and is fully compatible with mono or stereo sources.

Cherry Audio is introducing Galactic Reverb at the out-of-this-world price of only $19 ($29 list). Bypass the compressor. Initiate the matter-antimatter integrator. Engage the warp drive and go Galactic!

Galactic Reverb is now available at cherryaudio.com and authorized resellers worldwide for Windows and macOS, in AU, VST, VST3, AAX, and stand-alone formats, with a seven day demo.