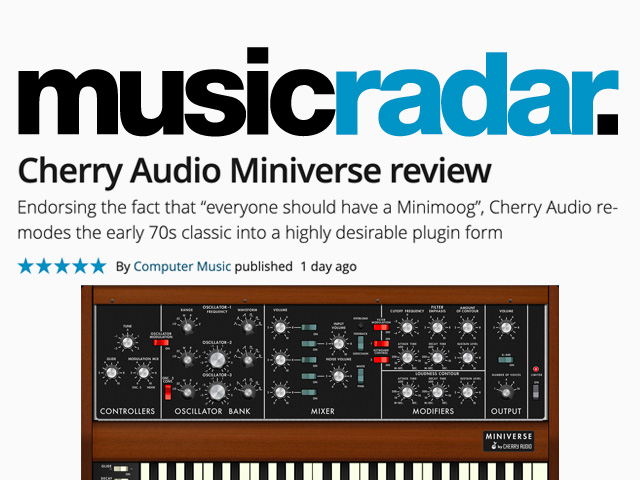 MusicRadar, the online portal for Computer Music and Keyboard magazines, has published its review of Cherry Audio's Miniverse synthesizer, and awarded it with a rare five-star rating!

We have put a lot of Minimoog plugins to the test over the years, and it’s interesting that while many sound authentic, in the bare bones, it is only when you apply all of the elements together that you get a real feel, and that is where the Miniverse scores very highly.

The review goes on to highlight the attention to detail which earned Miniverse its "Absolute Authenticity" tagline.

It has plenty of that grunt and swagger, which makes the Mini the classic that it is. The filter modelling is exemplary, as is the envelope behaviour, which is no mean feat, due to their classic stylisation and shape. At any price, this would be regarded as a future classic, at least in software form, but at this price, it is a total bargain that will not let you down sonically, and we can’t say that of all bargains!

Cherry Audio is deeply gratified to the editors of these publications for their continued recognition of our efforts. MusicRadar previously selected the Miniverse, Dreamsynth, and Lowdown synthesizers as three of their nine "Must-Have Soft Synths for 2022." As we enter the year's second half, we can promise that it will only get better!