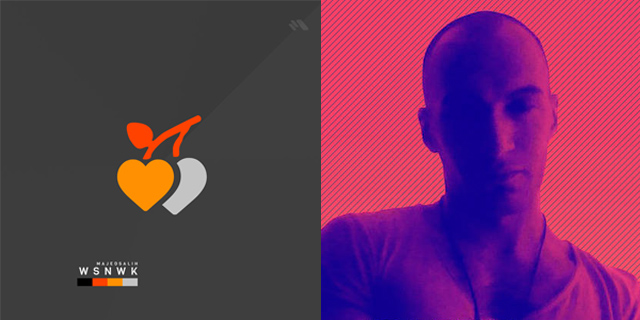 Majed Salih of Medievil-Music has taken the One Synth Challenge concept to the next level with WSNWK, a five track release composed exclusively with Cherry Audio synthesizers (DCO-106, Surrealistic MG-1 Plus, CA2600, PS-20, Memorymode, and Mercury-4). We took a moment to catch up with him and talk about his experiences as a musician and producer, and what inspired WSNWK.

Q: Can you tell us a little about your background as a musician and producer? We noted that your work was not always strictly electronic and that you have over 120 releases dating back over 15 years!

I started writing music at the age of 14. My parents are musicians themselves, in particular my father, Hamza Saleh, who is a professional guitarist and famous singer in Syria and the Middle East. My first experience with composing began with my father's mobile phone. I started to write ringtones by ear for my father and his friends using an application on his phone, without any musical education or knowledge of musical notation.

Since then, I was first fond of writing classical music, and then I began to switch to more electronic. This was simply because my classical compositions gained the least amount of listening and response, even though I spent a lot of time writing them. Medievil-Music became the name of my label or brand later, and I have been writing music since 2005 under that pseudonym. I really love the music of the Middle Ages, Renaissance and Baroque, so I chose this nickname for myself. This is because I have since applied various characteristics and musical techniques of those eras in all my tracks.

Q: What is your setup? Do you work mainly in the box, or are you a fan of any particular hardware?

I use a Ryzen 7 MSI laptop with an M-Audio Oxygen Pro 25 and OneOdio Studio Standard headphones. I have a Novation Launchpad Mini, but I rarely use it. I have worked in the box since 2005. I am a fan of hardware synths, but due to my lifestyle and constant movement around the globe, I am forced to cope with tasks using a minimum amount of equipment. For instance, when the war in Syria began in 2010, there was no electricity for almost 20 hours a day. At that time, I wrote music on my Nintendo DS using the KORG DS-10 app just because the battery lasted longer.

The story of this release began from the moment of my participation in the One Synth Challenge contest on the KVR Audio forum. A competition was launched about three months ago with the condition to use only the Surrealistic MG-1 Plus for all sounds. (EDITOR'S NOTE: His track, "Cherric", placed fourth in a very tight competition!) The track turned out to be very delightful for me. At that moment, I realized that with just one of your synths, I could sit at the screen for an hour without boredom, shaping all sorts of rhythms, basses, and leads.

After that track, I wanted to try the same thing with only DCO-106, and I finished another track. From that moment, inspiration began, and I started using only your synths for subsequent tracks until the wave of inspiration ended. The album's title WSNWK is a shorthand version of the Polish word "Wisniowka": an alcoholic drink made from sour cherries, and one of my favorites. Without prior preparation, the entire release was finished in five days (a track per day), thanks to a wave of inspiration from your synths (DCO-106, Surrealistic MG-1 Plus, CA2600, PS-20, Memorymode, and Mercury-4).

Cherry Audio synths have such high appeal to me, unlike many synths of this kind on the market. I tried many emulations of classic synths from various major manufacturers, but I could not grasp their interfaces so quickly. With some software, it was just a very cold interface that led to its rejection. At other times, it was the CPU load. The fact is that Cherry Audio synths were clear to me at first sight, even the CA2600.

Q: Have you been able to choose a favorite Cherry Audio synth of those you've used? Is there a hardware synth emulation you hope will be on our list in the future?

I use at least one Cherry Audio synth in my projects, especially the electronic/synthwave ones, such as Liphotrague (linked above). This is another Cherry Audio synth-oriented release (except for the drums sounds and fx). But those from my Top 3 are the most used.

Regarding future synths by Cherry Audio, I think it could be something like any classic drum synth, like an all-in-one 808, 909, 727, 606 with your ultra-creative interfaces!

Q: Who or what are your inspirations when creating music?

A: I am actually inspired by Baroque composers. Like J.S Bach (my most listened one), J.B Bach, Evaristo Felice Dall'abaco, Francesco Manfredini and Arcangelo Corelli. And of course, I listen to contemporary artists, but only for reasons of interest. Sometimes you want to stay up to date with the latest and trendiest sounds for today's listeners. When creating music, I just open my DAW and experiment without having any plans or templates in my head. I let the process of music-making lead me.

Q: After WSNWK, what's next for you?

A: I have many electronic tracks coming out in different genres. Starting in 2023, I plan to release something in hard techno style with all sorts of dark sounds. It's not that I collect these tracks and albums, which are more than 800 original tracks on Spotify and other streaming platforms. But I have developed a lifestyle from childhood where I try to start a new track every day. I just love the process of writing music.

Editor's Note:On behalf of the Cherry Audio team, thank you, Majed, for sharing your background, inspirations, and motivations with our readers. And thank you for choosing Cherry Audio!